Applications of the LAL test in the pharmaceutical industry 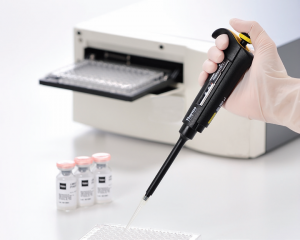 In bacteria, as in all living organisms, chemical reactions of nutrient transformation that allow the formation of structures which are vital for the life of these microorganisms take place.

These reactions as a whole form what we know of as the metabolism of bacteria. The lipopolysaccharides (LPS) that form part of the external membrane of the Gram-negative bacteria, are toxic for animals and humans, which is why they are known as bacterial endotoxins.

Lipid A is found without variations in all species and the nucleus, containing oligosaccharides that are joined with phosphate groups, also shows little variation from one species to the other. Antigen O however, which is responsible for the antigenic activity of bacteria, can present itself in many varieties between species. When the external membrane of the bacteria has been disrupted, the Lipid A becomes the cause of the toxic reactions, which is why this part of the bacteria is known as endotoxin.

The method that is currently recommended by European and American pharmacopeia to detect the presence of bacterial endotoxins in drugs is the Limulus Amebocyte Lysate (LAL) test. Since the establishment of this test in the 60’s until present day, many reagents, kits and devices have been introduced into the market and they have made the procedure increasingly easier with the gathering of precise data. Among the products commercialized by Wako for LAL testing, it is worth noting the Limulus Color KY series for the detection of endotoxins through the colorimetric method.

The cell wall of the Gram-negative bacteria has different functions. This system allows for extracellular secretion, but due to its characteristics, it only permits very small and lipophilic molecules to enter inside, acting as a defense mechanism. The characteristics of this membrane facilitate, to a large extent, the diversity of the mechanisms of action inherent to this type of bacteria and which can be found as a root cause of a great variety of disease states and health hazards, such as with contaminated wounds and burn injuries; or in gastrointestinal diseases with inflammatory response-mediated mechanisms, such as ulcerative colitis or Crohn's disease. At times, the body’s reaction to the presence of Gram-negative endotoxins may be so severe that it can cause the death of the patient.

Bacterial endotoxins are the most common and dangerous contaminants that can be found in the finished products of the pharmaceutical industry, which is why the quantities of these toxins are regulated and controlled in the production process of our commercial drug products. It can be confirmed that when a drug is free of endotoxins, it does not contain other pyrogenic components, considering that the bacterial endotoxins are the ones that have the highest effect as a pyrogen.

Quality control in the production of drugs through the LAL method

In recent years, with scientific and technical advancements in the pharmaceutical and biotechnological sectors, the demands for the quality of the products that are offered have increased. The method of Limulus Amebocyte Lysate has come to be used for determining the absence of pyrogens in finished products, above all, in those that are for parenteral use. The analysis of pyrogens constitutes one of the main tests in the quality control of the production of drugs, due to its repercussions on human health.

Wako offers the product line "PYROSTAR™", which consists of accessories, kits and solutions to carry out the LAL test according to the regulations of the FDA and the European Medicines Agency.