The Detection of Endotoxins Via the LAL test, the Turbidimetric Method 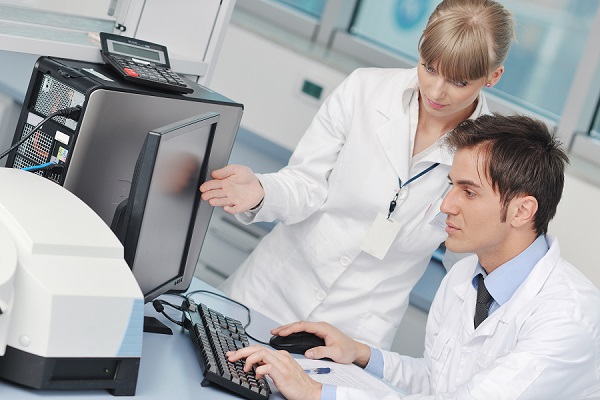 In the previous article of this blog, we made reference to the Gel-Clot method to qualify endotoxins using the Limulus Amebocyte Lysate (LAL) test. This article focuses more on the turbidimetric method, which is another one of the techniques used when endotoxin analysis is conducted.

As mentioned before, the Limulus Amebocyte Lysate is useful for the detection of endotoxins whether in raw materials or finished products of the pharmaceutical industries and food, among others. It is also used for research-related purposes. This test can be carried out in a qualitative, semi-quantitative or quantitative manner based on whichever one is necessary. The qualitative analysis via the Gel-Clot method is the simplest and cheapest, as it does not require any equipment for detecting gel formation that indicates the presence of endotoxins and thus, the positive result of the LAL test. Other methods that are more costly but more precise at the same time are colorimetrics and turbidimetrics. The kinetic turbidimetric method or KTA is perhaps the most commonly used method for endotoxin detection and requires a photometric instrument such as the Toxinometer® ET-6000 system to measure the rate of turbidity change.

Turbidimetry is an analytical and optical technique that is based on the phenomenon that occurs when solid particles appear in a homogeneous solution. This loss of homogeneity makes the light that passes through the solution not be of the same intensity as before the appearance of the turbidity. We understand that turbidity is “the optical property of a sample that makes the radiation be dispersed and absorbed rather than transmitted in a straight line across the sample”. If the transmitted light is measured at a particular wavelength, we can get a value that is proportional to the concentration of the substance or the substances that are present in the solution responsible for the turbidity. For these measurements, a spectrophotometer is used. A spectrophotometer is a highly common piece of equipment in an analytical laboratory, as well as, in clinical laboratories. Specific instruments called turbidimeters have been developed for this technique; however, they are nothing more than variations of a spectrophotometer.

Turbidimetric methods are frequently used in biology, firstly to control cellular growth and the count of cells in the solution, as well as, for other analytical techniques related to the detection of micro-organisms, such as the LAL test. To control the growth of a cell population through turbidimetry, which could, for instance, be comprised of bacteria, we need to take into account that not only the number of cells but also the size of these cells has an influence on the dispersion of light. Turbidimetry allows us to evaluate the growth by estimating the cellular mass contained in a sample. To avoid errors in turbidimetric measurements, normal curves are usually measured for each micro-organism. Using turbidimetry, we can get straight lines that relate the transmittance to the dry weight of the micro-organisms when these organisms are encountered in diluted solutions, by applying the principles of the Beer–Lambert law.

The principle of the LAL test is the coagulation reaction that occurs when the amebocytes extracted from the Limulus Polyphemus crab enter into contact with bacterial endotoxins. The endotoxins trigger a series of chain reactions that result in the proteins falling in gel form. The importance of conducting this test to all pharmaceutical products, food or any other type of product that is going to come into contact with humans lies in the harm that the Gram-negative bacteria can cause in the organism. These bacteria are the ones that release the endotoxins when they are attacked by the defence mechanism of humans and their cellular wall is broken. The release of endotoxins causes an immune response, which results in the release of cytokines. High levels of cytokines in the blood can cause severe respiratory conditions, processes associated to the death of a great quantity of cells and even death of the infected organism.

VIEW ALSO: The Impact of Endotoxin on the Human Body

When turbidimetry is used in LAL tests, what we measure is the turbidity of the solution when the coagulant begins to be formed. The insoluble protein is responsible for the appearance of a gel in the tube where the test takes place. Having the patterns of the endotoxin, we can measure the turbidity through a spectrophotometrical method and this measurement allows us to quantify the amount of endotoxins that are present, which is why the results of this test are always relative. The analysis can be conducted through the turbidimetric endpoint method or through the kinetic turbidimetric method.

In the turbidimetric endpoint test, we need to take the reading of the turbidity at a determined period of time. This leads to manipulation errors and it has a disadvantage in that the reading cannot be taken correctly in a single sample and therefore the entire process will need to be repeated or that there is only a single moment to make the measurement and the measurement needs to be precise. If the reading is not taken at the moment indicated, the gelation continues. For these reasons, this method is not used much.

The kinetic turbidimetric method, on the other hand, has been more successful, in part because of the technological advancements in the past few decades that have made it possible to connect readings of multimedia plates along with temperature control and the whole process of data collection being totally computerized. Another characteristic feature of this method that makes it very popular when it is time to develop a LAL test is its low limit of detection and the wide range of endotoxin concentrations in which the measurements can take place, being able to construct normal curves in a concentration range of up to 100 endotoxin units per a millilitre of the solution.

The relationship between the appearance of the turbidity in the LAL test and the endotoxin concentration is exponential. Therefore, we can get a straight line using the antilogarithms of variable time and the concentration antilogarithms of the solution patterns. With the straight line we get from the regression, we can know the endotoxin concentrations in the samples subject to the study in the subsequent experiments. The temperature factor plays a fundamental role in these tests. In order to get a good level of reproducibility and precision in the results, we need to make sure we control the temperature. It is necessary to work at the temperature indicated in each protocol.

Different variations of the LAL test have been investigated using turbidimetry, which have yielded rapid tests of endotoxin detection conducting the test at higher temperatures than the normal ones, which are around 37 ºC, or, for instance, the introduction of the reagents in nano particles.

The PYROSTAR™ ES-F and the PYROSTAR™ ES-F/Plate reagents are products by Wako that serve for bacterial endotoxin detection by applying the scientific method of turbidimetry. These products are sold to be used in measurements made for research-related purposes. Under no circumstances should they be used as diagnostic methods.

In order to use the reagent PYROSTAR™ ES-F/Plate, it is necessary to have a microplate reader like the Tecan Sunrise™ Microplate Reader and the corresponding software. The actual procedure consists of making measurements to have a calibration curve that covers between 10 units less and 10 units more than what the samples are predicted to be found. Measurements are made in positive and negative controls and the samples are measured in duplicate to ensure the quality of the measurements. Measurements should be taken every 40 seconds at 405 nm and at a temperature of 37 ºC on each one of the dishes of the microplate once the reagent PYROSTAR™ ES-F/Plate is added to the samples. The microplate reader monitors the turbidity of the samples in order to determine the time that the turbidity takes to appear, and with the transmittance data, the software calculates the regression curve that allows us to determine the concentration of endotoxins. This reagent includes the Curdlan (β-1, 3-glucan) to remove the interference that this compound produces and is sold with standard control endotoxin or without this substance.

Wako also manufactures a photometric instrument that can be used to measure the speed of change in the turbidity of the solution in the LAL test, called the Toxinometer® ET-6000. This instrument uses a LED of 430 nm wavelength as a source of light and also has the advantage of on-board temperature control, which is very important in this test.