Recent research on the issue of bacterial endotoxins 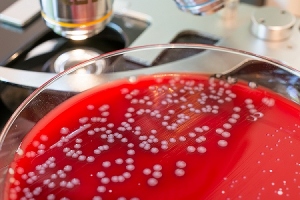 Bacterial endotoxins are the most common pyrogens found in pharmaceutical products. These substances are found in the outer membrane of Gram-negative bacteria and when cell lysis occurs in bacteria, they are released to the environment where the bacteria are located. In mammals, bacterial endotoxins, which are lipopolysaccharide molecules, cause various conditions that can lead to such serious complications as a septic shock. Therefore, it is important to have reliable procedures for the detection of bacterial endotoxins both in the industry and in research laboratories.

Wako has materials and reagents to perform the detection of bacterial endotoxins by the LAL (Limulus Amebocyte Lysate) method. All these products are marketed by the brand new PYROSTAR™ and include kits for the quantification of endotoxins by colorimetric and turbidimetric methods, a computer for reading the parameters studied by the LAL method called the Toxinometer® ET-6000 and endotoxin-free materials needed to carry out the experiments.

Below, we discuss some studies conducted recently in the field of bacterial endotoxins. These studies help to increase the awareness regarding these types of structures, assisting to improve their means of detection and to understand the mechanisms by which toxic effects are produced.

In the article entitled "The 'genomic storm' induced by bacterial endotoxin is calmed by a nuclear transport modifier that attenuates localized and systemic inflammation", the authors analyse the effect caused by the transcription factors that act as atomic carriers in response to the stress caused by the storm generated by the presence of lipopolysaccharides in murine models. Specifically, the study focuses on localized damage caused by bacterial endotoxins, such as acute lung and systemic damage, as well as lethal endotoxic shock. In the analysis carried out it was found that contact with lipopolysaccharides indeed affects all genes that are regulated by a group of transcription factors that are responsible for sending proinflammatory signals to the nucleus. This response profile in mice was observed to be very similar to the one seen in humans, due to the presence of endotoxins. The importance of this study is the high percentage of immunocompromised patients in whom infections caused by Gram-negative bacteria have been detected and who die at a high rate due to septic shocks. Therefore, the authors conclude that a treatment with a suppressor for the production of chemokine and proinflammatory cytokines would be effective to control this storm caused by the response to lipopolysaccharides. It is seen as an ongoing need that the FDA approves a drug to be used for the treatment of ventilated patients who are found in an immunocompromised situation as lung damage caused by bacterial endotoxins is very common.

In another study published recently, the relationship between alcohol consumption and an increased endotoxin concentration in the blood serum is studied. The research specifically focuses on the relationship between alcohol consumption and the response of proteins that are responsible for mediating cellular stress. Alcohol consumption prevents the body's defence mechanisms to act efficiently, causing an increased susceptibility to infections. The authors conclude that the amount and form of alcohol consumption influence the body's immune response, regulating the activity of mediator proteins of the body's proinflammatory response to an infection, as in the case of infections caused by bacterial endotoxins. It was found that a single dose of alcohol in healthy individuals increases the level of endotoxins in the blood serum. This increase in serum lipopolysaccharides, though small, can trigger a chain of reactions leading to an inflammatory response in the body. In individuals who suffer from a disease that causes their immune system to be suppressed, alcohol consumption, with the increase in blood endotoxins which this consumption would bring about, can have worse effects on health in general.

ALSO READ: Determination of endotoxins in the plasma via the LAL method

A very interesting study on the issue of bacterial endotoxins is the one conducted by Jay Bolden et al, who demonstrated that bacterial endotoxins can indeed be detected by the Limulus amebocyte lysate method with great reliability even in pharmaceutical products where there was thought to be a masking mechanism. As part of this work, the determination of bacterial endotoxins in drugs of biological origin containing citrate, histidine, phosphate and sodium acetate buffer in their formula, which are among the substances that were thought to mask the presence of lipopolysaccharides, was performed and the LAL test has shown positive results even for storage periods up to 6 months.